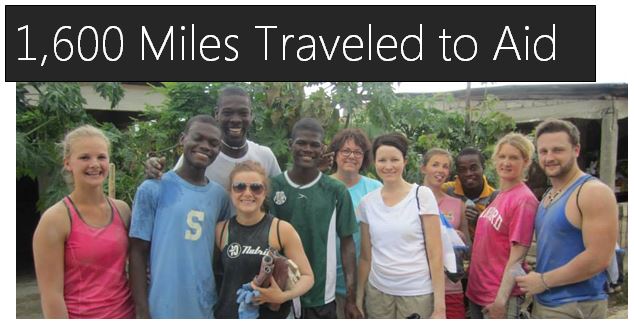 In July, Heather DeWitt Couch, Loan Officer at the Sikeston branch, traveled with Restore Haiti to Jacmel, which is located south of the capital city of Port-au-Prince.  Heather, her mother, and five other volunteers spent a week working on a home and feeding the children that live in the town.  The following are excerpts from her journal:

Arrived in Haiti today.  The ride from Port-au-Prince was 3-4 hours long.  Port-au-Prince was very dirty with trash everywhere.  The city is also very congested with people.  We drove up the mountains to get to Jacmel.  The ride was definitely very curvy!  We had stew for dinner which had goat in it.  It tasted like potatoes and was actually pretty tasty.

Went to church at 8:30 and it did not get over until almost noon.  The preacher spoke about giving even though you may not have much - it was a great message.  Met a lot of kids today!  After church we took a tour of the town and walked to the beach.  The view of the ocean & mountains was beautiful, but the beach was very dirty.  The town is very rough.  Many people just throw their trash in the ditch and on the ground.  It is pretty terrible – all of the trash.  I saw four big pigs lying in the ditch where sewage & trash was.  They were trying to cool off by the water.  It was a pretty disgusting sight! 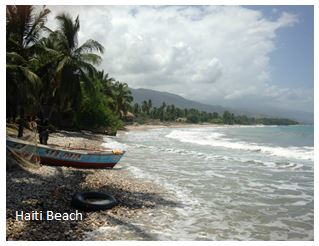 The power in the town is not consistent.  It is turned off around 3 in the morning and not turned back on until around 3 or 4 in the afternoon.  Bernard, the owner of the hotel where we stayed at, would thankfully turn on a generator when the power was shut off during the night until morning time.  Our room’s AC did not work very well with the normal power on so we were thankful when the generator was turned on because it powered the AC unit much better!  We wish our bedrooms were cooler, but it is ok.  There is not enough water pressure for a shower.  Thankfully there is a bucket for us to use to rinse off.

I had peanut butter & jelly for breakfast.  I figured the spicy eggs would be too much with the heat at the construction site and be a “safer” choice.  We sanded the inside of the house for three hours.  The houses are built out of concrete that is made from sand in the village.  There is little air that flows through the house. It was so hot that I sweated like never before.  The dust from sanding stuck to us and everything it touched.  Thankfully, we finished most of it up.

We went to the feeding program after lunch.  It was very emotional.  The kids got a bowl of rice & sauce with a noodle on top.  They ate it very quickly and then gulped down a glass of water or juice.  After they ate we gave out stickers, which was crazy!  The kids were all over me.  They don’t have much so when they have the chance to get something, they grab for it and become very territorial.  Thankfully, Tiana was able to teach me how to say the word line in Creole (liy).

Haiti and America are so different in so many ways.  To see the conditions that people live in is horrifying.  The trash and dirtiness that is everywhere is so hard to comprehend.  The people seem joyful but it is easy to see that life is very hard on them physically.

Jean Mary, one of our local guides, told me about his childhood today. He said that when he was younger, his father would wake him at 3 in the morning to go get water.  This way, he would be able to beat the long lines.  Jean Mary would eventually get back home around 6 and then go to school.  “Some walk 45 minutes in one direction for water.” Now his family buys water from their neighbor.

We sanded the house again today & wiped the walls down to prep for painting.  After lunch we played wiffleball with the kids, which was a lot of fun.  They did not know how to play baseball so we showed them how.  The kids loved hitting the ball – it looked like homerun derby.

The feeding program was pretty crazy as usual.  I helped wash the cups.  Each kid got a glass of juice.  They gulp it down so fast!  Later that night at church, Mom & I went outside for a break.  We saw a little boy playing by himself in the dirt.  We gave him a little beach ball to play with & his eyes got so huge!  It was precious!  We played ball with him and a couple of other boys, it was so much fun! During church we made salvation bracelets with everyone.  They really liked it and it went over well! 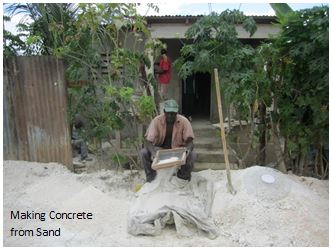 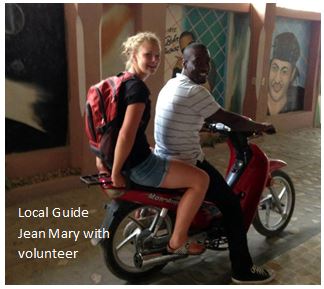 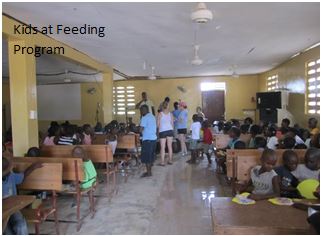 We painted at the house today.   The paint was very watery and it did not adhere to the wall like it should.  They also didn’t use a primer for the paint.  We put on several coats!  We went to lunch and then the feeding program.

We painted & sanded again at the house.  It is looking better!  The lady moving into the house was hauling rock for the workers.  The women work very hard in Haiti.  I think she has six kids.  The house costs $12,000 to build.  She is required to pay $6/month for 10 years then the house will be hers.  The house has its own cistern located on the front porch.  It has a lock on it to keep people from stealing her water.  A delivery truck will bring water to the house.  This is a luxury for many in Haiti to have their own source of water.

After work we went to lunch... then to the feeding program.  I helped serve the bowls to the children that day.  We did a t-shirt craft with them.  They really enjoyed it, but it was crazy as usual! 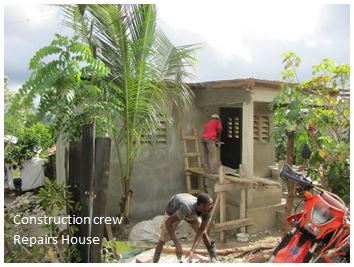 Went to breakfast and then to see the land the church owns.  They currently grow corn on it.  However, there were not very many ears on the corn.  Their plans are to eventually have a chicken farm on it.  This would provide food for the children and income to the organization.

After this we went to the beach for the day.  The water is gorgeous and it was wonderful to swim in.  But there were no beach lounge chairs and parts of the beach had trash on it.  It was not the beach atmosphere we have been accustomed to!  It was still very nice to have the afternoon off and enjoy the beautiful water!

That night we went to a restaurant and had dinner.  This was our only dinner that week at a restaurant.  The evening was very nice and the food was very good!  We were able to get to know the head pastor much better tonight.  He explained his vision for their organization and how they have already made a difference in the local community.  The stories were incredible and almost unbelievable at times, some they just broke my heart.  They are trying to meet the needs of the local community and change it for the better.  The pastor has such a heart for God and His love definitely shows through him.

We said our goodbyes today.  It was very sad. But I was also very ready to get back to the comforts of my home!  I definitely see myself going back to Haiti, hopefully at least every year or every other year.  There is a great need in the country and hopefully we can help change it in a positive direction.

Restore Haiti is a non-profit organization out of Franklin, TN with a mission to empower a community to rise from a culture of desperation to one of hope through providing assistance in the areas of nutrition, education, health care, and general living conditions.  You can sponsor a child for a little as $33 per month which helps to provide shelter, food and education.  You can visit their website at www.restorehaiti.com for more information.